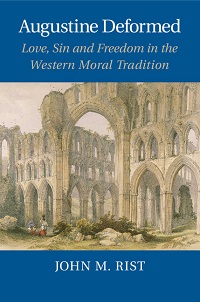 Love, Sin and Freedom in the Western Moral Tradition

Augustine established a moral framework that dominated Western culture for more than a thousand years. His partly flawed presentation of some of its key concepts (love, will and freedom), however, prompted subsequent thinkers to attempt to repair this framework, and their efforts often aggravated the very problems they intended to solve. Over time, dissatisfaction with an imperfect Augustinian theology gave way to increasingly secular and eventually impersonal moral systems. This volume traces the distortion of Augustine's thought from the twelfth century to the present and examines its consequent reconstructions. John M. Rist argues that modern philosophies should be recognized as offering no compelling answers to questions about the human condition and as leading inevitably to conventionalism or nihilism. In order to avoid this end, he proposes a return to an updated Augustinian Christianity. Essential reading for anyone interested in Augustine and his influence, Augustine Deformed revitalizes his original conception of love, will and freedom.

John M. Rist is Professor Emeritus of Philosophy and Classics at the University of Toronto and was Father Kurt Pritzl, OP, Chair in Philosophy at The Catholic University of America in Washington, DC, from 2012 to 2014. He is the author of fourteen books, including What Is Truth?: From the Academy to the Vatican (Cambridge, 2008) and Plato's Moral Realism: The Discovery of the Presuppositions of Ethics (2012).