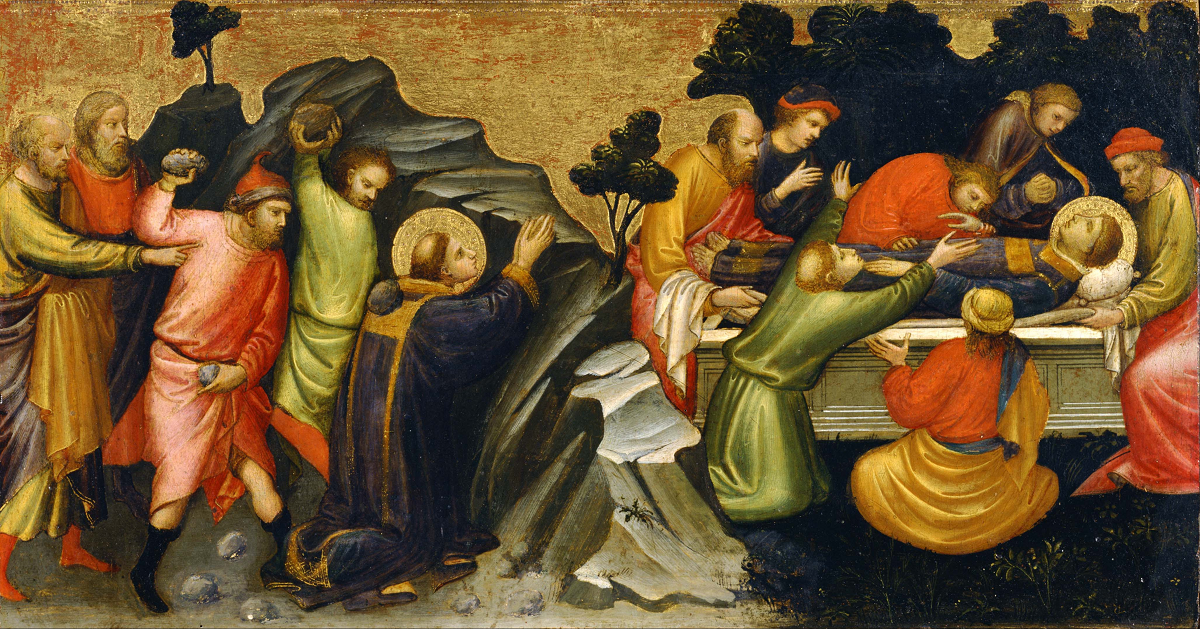 1. Historical and liturgical context. – According to tradition, the relics (↗Reliquiae (martyrum)) of the first martyr S. who appears in Act 6-8 were discovered in December 415 together with those of Gamaliel and Nicodemus at Caphar Gamala near Jerusalem – a discovery that was due to three revelations received by the local priest Lucianus [1]. The relics were transferred to the city, but some bones and dust (‹puluis›) remained in the possession of Lucianus, who dictated a Greek report of the events for the exiled Avitus of Braga. Part of the remains as well as a Latin translation of the report were passed on by the latter to Paulus ↗Orosius, whom A. had sent to Palestine in the context of the latter’s conflict with Pelagius. The remains were meant to be transferred to Avitus’ bishop Balconius of Braga, but eventually did not reach him. However, around 418, parts of S.’s relics arrived in Menorca and also in Uzalis (↗Vzalis), where the martyr’s cult was promoted by A.’s friend and fellow bishop ↗Euodius and whence the relics were distributed over other North-African localities: Aquae Tibilitanae, Castellum Sinitense, ↗Calama and ↗Hippo Regius. A small amount of the ashes arrived in the latter city in 424/425 [2], where they were deposed in June/July 425 under an altar in a ↗‹memoria› [3] that was constructed near the main basilica at the expense of the deacon and A.’s future successor ↗Eraclius [4]. This ‹memoria› bore a now lost epigram of four verses that was probably written by A. himself, and possibly also a fresco or mosaic representing S.’s stoning [5].

The transfer of S.’s relics from Caphar Gamala to Jerusalem took place on 26 December – a date the Eastern Church had been celebrating as the saint’s feast since the late fourth c. [6]. The African Church took over this feast [7] (↗Festa sanctorum et martyrum, 2,1298sq.), for which A. reserved the reading of (part of) Act 6sq. [8]. The same text was also read at (the anniversary of) the dedication of the ‹memoria› [9] and during the ‹lectio continua› of Act that started every year on Easter Sunday [10]. Additionally, contemporary miracle records – the so-called ‹libelli miraculorum› – were also used in the liturgy for S. [11] (↗Lectio, 3,915sq.).

2. S. in the works of A. – From his early works onwards, A. frequently referred to S. [12]. The latter’s importance for A. was based on his being the first martyr (↗Martyres, martyrium), whose death preceded even that of the apostles and was the only martyr’s death narrated in a canonical text [13]. Additional factors were parallels between S.’s ‹passio› and Christ’s as well as Paul’s involvement in his martyrdom (hence the frequent association of both saints in A.’s works) [14]. Most of A.’s references occur in homilies, particularly in those linked with the cult of S. himself (↗Sermones (ad populum), 5,296- 300.307-318.340sq.): s. 314-317 and s. Weidm. 13 were delivered on his ↗‹dies natalis› (26 December) [15]; s. 318-319 at the dedication of the saint’s ‹memoria› and one of its anniversaries [16]; s. 320-324, which testify to the miraculous healing of the Cappadocians Paul and his sister Palladia, on four consecutive days starting from Easter Sunday 426 [17].

The discovery of S.’s relics and their spread in Africa marked a change in A.’s attitude towards miracles [18]. The bishop’s initial scepticism regarding the possibility of miracles in Africa in his own time [19] gave way to acceptance and even promotion of the belief that such miracles did still happen (↗Mirabilia, miraculum). However, A.’s veneration of the martyrs, and of S. in particular, always remained centred on Christ and avoided any form of martyrolatry [20]. The extensive list of contemporary miracles in ciu. 22,8 – including several attributed to S.’s intervention – was to prove in the first place that miracles were performed not only during the Church’s earliest history, but also in A.’s own days, in order to strengthen faith and to bear witness to the belief that Christ rose in the flesh and thus ascended into heaven [21].

Major recurring topics in A.’s references to S. as a martyr are the following (apart from those applying to martyrs in general): the rhetorical comparison of the ‹natalis domini› (25 December; ↗Natiuitas Christi (natalis domini)) and the ‹natalis Stephani› (26 December) [22]; the etymological explanation of the name Στέφανος as referring to the crown of martyrdom [23]; the representation of S. as a humble deacon who underwent martyrdom prior to the apostles by whom he was ordained [24]; the claim that while speaking hard words to the Jews at the end of his oration to the Sanhedrin (Act 7,51-53), S. still loved them in his heart [25]; the association of Jews’ hard-headedness (Act 7,51) with their having killed S. by throwing hard stones at him [26] or having received the Law on stone [27]; the comparison of the protomartyr’s ‹passio› with Christ’s, specifying both differences and similarities [28]; the observation that when praying for himself (i.e. for a just man) S. was standing, whereas he was kneeling down when praying to God to forgive his persecutors (Act 7,60) [29]; the claim that the conversion of Saul, who is frequently said to have stoned S. with the hands of all persecutors [30], was the best proof of the effectiveness of S.’s prayer [31]. Imitating with his prayer Christ’s request to the Father to forgive those crucifying him (Lc 23,34) [32], S. obeyed the Lord’s commandment in the Sermon on the Mount to love one’s enemies and to pray for one’s persecutors (Mt 5,44) [33]. Moreover, as a ‹conseruus› of all Christians, he thus proved that even an ordinary human being, and not only Christ, was able to fulfill this extraordinary commandment [34] (↗Seruus dei). For A., love for one’s enemies was essential to the ‹imitatio Stephani› [35].

The account of S.’s death is also referred to in other theological and exegetical contexts. Considering S.’s long oration in Act 7,2-53 an authoritative text on the history of the Jews, A. uses the oration in his exegesis of Genesis and Exodus [36]. S.’s claim that he could see «caelos apertos et filium hominis a dextris stantem dei» (Act 7,56) was referred to as proof of the corporality and visibility of the risen Christ [37] and as an argument in favour of a nonliteral interpretation of the formula «sedet ad dexteram patris» in the Creed [38]. Finally, A. stresses the Church’s universal character by referring to the events immediately following the stoning of S., when Saul’s persecution dispersed the Christians of Jerusalem (Act 8,1-3) and thus contributed to the expansion of the Church throughout the world [39].